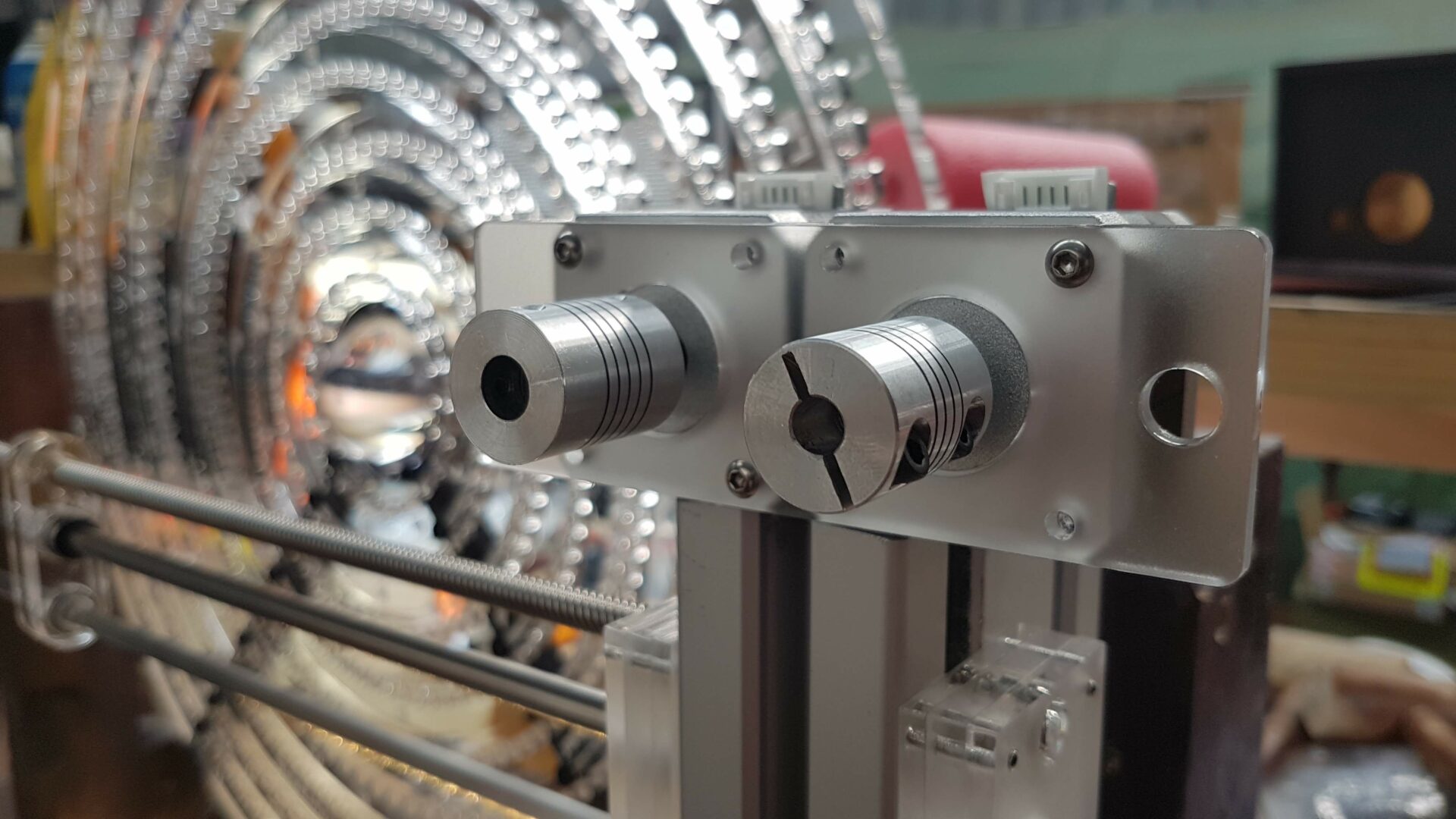 The basic mechanism is 2 x 8mm stainless-steel rods spun by two stepper motors. One rod is a lead-screw, which drives a little gantry which slides a little cog along a hex-rod, which is driven by the other motor.

This means there doesn’t need to be “wires connected to moving parts”, which are a worry.

Motors == Two Nema 17 steppers – the 17 referring to physical width of the motors, in inches, times 10 which is not what I would have called them. (I tried 9s, but I don’t think they’d be strong enough)

The brackets have been through about 30 incarnations, and it ain’t over yet. I think I might wind up chopping the AL frame off at the bracket bottom, and having a solid brick of acrylic at the top with all the rods etc going into it.

Would look cool lit up, although I’m still quite enamoured of the black cover thing.

Yea – I think I’ll chop the tops off the frames on each side – put a 140mm high clear block on each side – put the motors on one side, and the Pi on the other – I think it’s going to need a little touch-screen. I really don’t want to get into the business of writing Apps – that will need to reside on platforms owned by various contemporary embodiments of corporate evil.

If it’s going to last 10,000 years it needs to be able to adapt to new economic/environmental conditions, and the stacks aren’t going to be around forever. It needs to be able to stand alone… or at least until it becomes a proper DAO, standing alone with the help of a human minion to pay its electricity bills.

That said (and in credit to google) it will probably running Google’s facial-recognition AI. They cost about $100, which includes the cost of the Pi it’s running on, so given what’s being delivered, Google are practically giving them away. I bought one at the beginning of lockdown in 2020. Haven’t even turned it on. Poor little thing.

It can (according to Google) recognise facial expressions, so I’ll set the clock up so it is motion-detect back/side lit… so it lights up white/gold when the cat walks through, and if anyone smiles at it, it blushes pink.

I’m thinking of giving it its own phone and Insta account as well so it can take selfies of itself.

Ok, I guess I don’t really have a problem with getting attention via the stacks, I just don’t want to write apps.