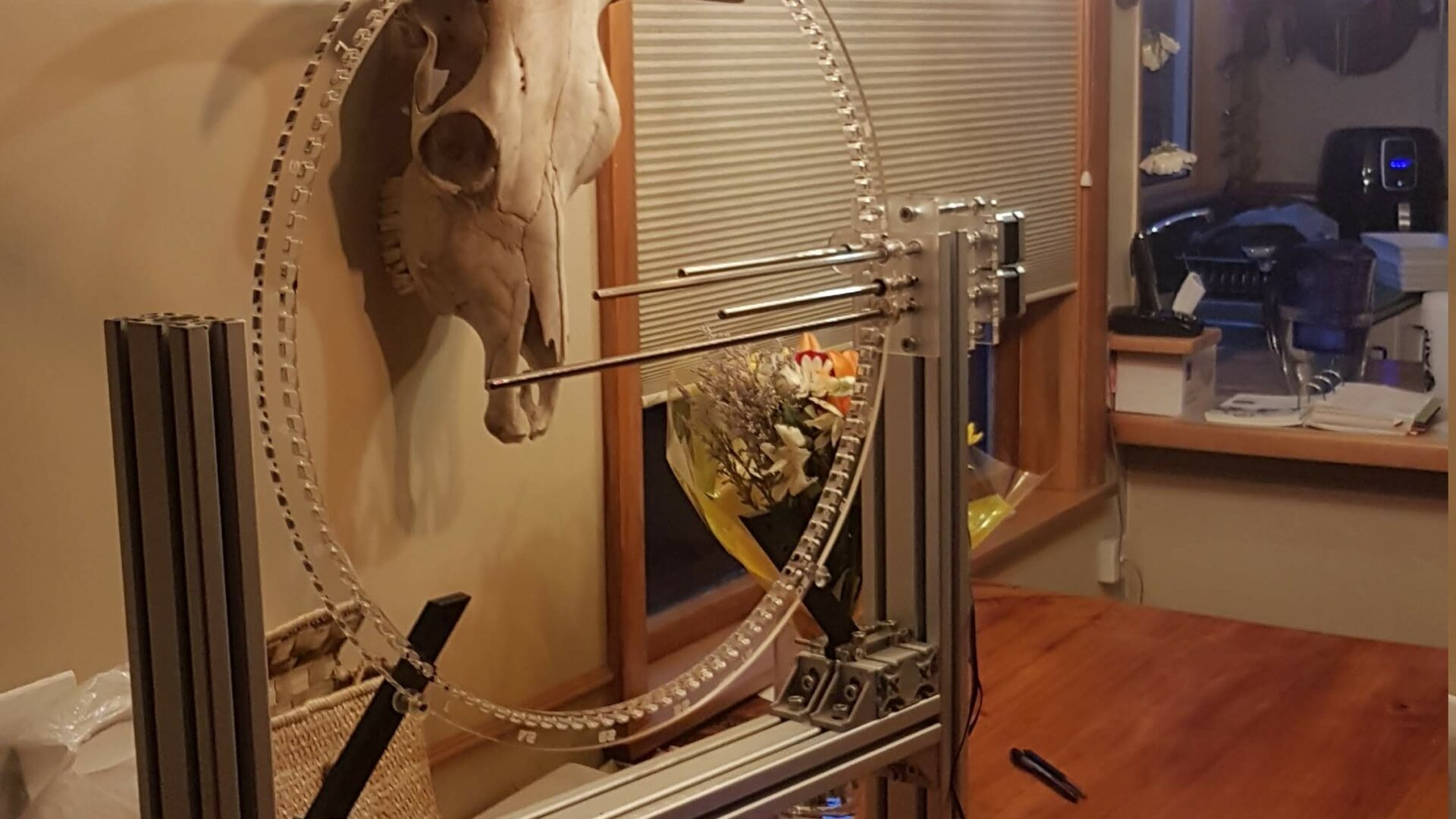 I have found (after years of trialling, erroring and failure) that whenever I do anything, it’s a good idea to consult with my brother Dom first.

He is a master of the material-plane, and knows a great deal more than I (a chancer having a bad hair day), about these things. He is a classically-trained industrial-designer with decades of experience at the artistic end of robotics. Used to make massive robotic cranes for Peter Jackson etc. Makes giant animatronic sharks for museums. He’s a proper person.

It was his birthday yesterday, so I took the whole thing down to see what he thought… and mainly what to do about the crazily noisy motors.

Steppers (it transpires) make different noises according to what speed they’re running at, and there’s an entire genre of youtube videos devoted to stepper-motor music.

Mine being a whole lot less musical

That’s my mum talking in the background… I think she’s talking to the cat (who is a good cat) and who she thinks is a small furry human, who despite not saying much is often the only one who has any idea what’s going on.

Which is fair enough I suppose.

So apparently I’m going to have to use motors other than steppers, and as the design is all about repeated 360 degree turns (I think), then a regular DC motor will do, although when I asked how much they cost, he said $1000 (which is a whisker too much)… so I guess I’ll be doing some more research on that one.

Can’t be having immortal processes without external interfaces. It’s dangerous, and against the spirit of the thing…. although I am going to have to write a really simplified interface so people can hook it up to their wifi or whatever, because bright though the screen is, it is still very very very small.

Hard to say – I wouldn’t have thought it likely, but it IS a little computer (Turing Complete etc) so theoretically should be updateable to work with any protocol… where there’s a will, there’s a way – and with Open Source gear, comes Community… so the shelf-life of the Rasperry Pi will (like Arduinos) be a hell of a lot longer than “replace every 2 years” laptops. I wouldn’t be at all surprised if 100 years from now there are communties of people who obsess about vintage electronics the same way they do about traction engines and such today… and once you get into the “multiple hundreds of years” range, there will be a cultural value in keeping the thing running.

I have a guitar amp that is older than I am… and it’s here for the innings now. It’s an antique. After me, someone else will keep it going.

Part of the design-philosophy behind having a proper programmable computer driving the thing is that it then becomes open to experiment and adaptation by other people. The plan is to have an AI (google’s little facial-recognition system) onboard so it blushes when you smile at it, but there’s no reason why it shouldn’t be host to increasingly advanced AIs so it winds up calling you Dave and refusing to open the doors, and singing drunkenly about Daisies and such when you turn it off. It’s only human.

While I’m waiting for the new motors to arrive I need to stabilise the whole wheel situation. Bit wobbly at the mo.

Morning after. It’s not a problem.